NDN Collective Collabs with Artists to Defund the Line 3 Pipeline

Artists create and call others to join the fight to stop Line 3. Nationwide wheatpasting action occurs with some 6,000 Defund Line 3 newspapers making their way to over 400 groups and activists.

In preparation for participation in a wheatpasting action for the #DefundLine3 Arts Visibility Week of Action, individuals could request a #DefundLine3 Newspaper from NDN Collective and Stop the Money Pipeline organizers. So far, roughly 6,000 newspapers made their way to over 400 groups and activists spanning multiple states across the U.S.

To date, hundreds of Indigenous leaders, Water Protectors and allies have been violently accosted, removed and arrested in their efforts to put a stop to the destructive Line 3 Enbridge project. Meanwhile, pipeline developers continue to ignore the sovereign rights of various Indigenous Nations whose homelands they are desecrating. Just this past week at the Red Lake Treaty Camp in Pennington County, Minnesota, Indigenous leaders in ceremony were violently disrupted by law enforcement who proceeded to aggressively arrest those who positioned themselves between law enforcement and those in ceremony– a blatant violation of the American Indian Religious Freedom Act.

The #DefundLine3 Campaign seeks to suffocate the financial backing of the Line 3 pipeline by prompting individuals to contact banks, CEOs and executives, calling upon them to  cease funding of the project. The #DefundLine3 Arts Visibility Week of Action further amplified these efforts, providing the tools and creative direction to allies and organizers across Turtle Island to join in on the campaign.

Leading up to the  #DefundLine3 Arts Visibility Week of Action, NDN hosted an art deployment webinar, providing instruction on art-based tactics for participants to deploy in their home communities during the week of action. Participants were introduced to art-based tactics involving newspaper posters, street murals, banner drops, street theater and more, as  vehicles of expression to highlight the change necessary to preserve and protect the land and people. 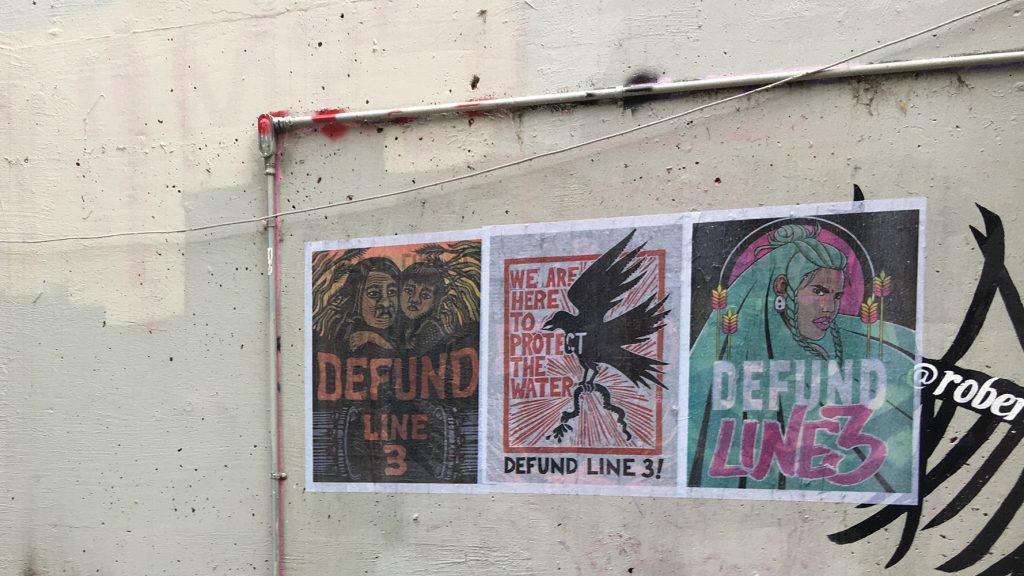 During the week of action, participants wheatpasted #DefundLine3 art across various states across the U.S., with some 6,000 #DefundLine3 newspapers making their way to over 400 groups and activists.

“There were a lot of moving parts for this project including shipping and designing the entire process itself,” said Wagoner, a collaborating planner for and contributing artist to the project. “There are definitely areas that [project collaborators] can improve on, but we look forward to providing more opportunities for projects and trainings in the very near future.”

David Solnit, prominent organizer, author, artist, puppeteer and co-founder of Art and Revolution, also served as a co-coordinator of the project, utilizing his experience and craft in leading others in art action.

For those interested in taking part in the Stop the Money Pipeline #DefundLine3 art actions, the Defund Line 3 Art Kit is still available, and contains an array of project opportunities, including songs, banners, stencils, virtual banners, street murals and more.

NDN Collective will be sharing more on the artists who contributed to the Defund Line 3 Newspaper in the future. Visit the Stop the Money Pipeline website for more ways to take action in the fight to stop the Line 3 tar sands pipeline.