Risks for the Future We Want

How can philanthropists learn from protesters and reimagine the formula for making change on racial justice? In this Stanford Social Innovation Review article, Mekaelia Davis, director of Surdna’s Inclusive Economies program, examines philanthropy’s relationship to risk and offers six steps impact investors and funders can take right now. She also shines a light on why the biggest risk of all is inaction.

Over the last six weeks, thousands of people across America have been arrested at protests, with millions marching in the streets. Despite a pandemic, so many people (including myself) have been willing to take the risk, breaking stay-at-home orders and potentially exposing themselves to the virus, in the fight for racial justice. And these risks have had results: Long-time fearless activists, timely global protests, and many actions of solidarity have taken the Black Lives Matter movement mainstream. A majority of Americans now support the movement, according to a recent Civiqs poll, and politicians at almost every level are following suit. What was seemingly impossible was made possible in a matter of weeks.

How can philanthropists learn from the people in the streets and reimagine risk?

Taking risk has always been part of the formula for change and securing racial justice will require risks like never before. That’s why those of us in philanthropy who are fighting for racial and social justice, advocating for racial equity, and working to close the racial wealth gap need to re-think how we calculate risk, and raise our tolerance for it. It has been thrilling to see large foundations, financial institutions, impact investors, and other resource holders commit to increasing their financial support to Black leaders, nonprofits, and communities. However, if we don’t fundamentally reimagine our relationship to risk—which dictates who we fund and how aggressively we address systemic barriers—we will be doomed to repeat the results of the past.

Read the Full Article on SSIR.ORG 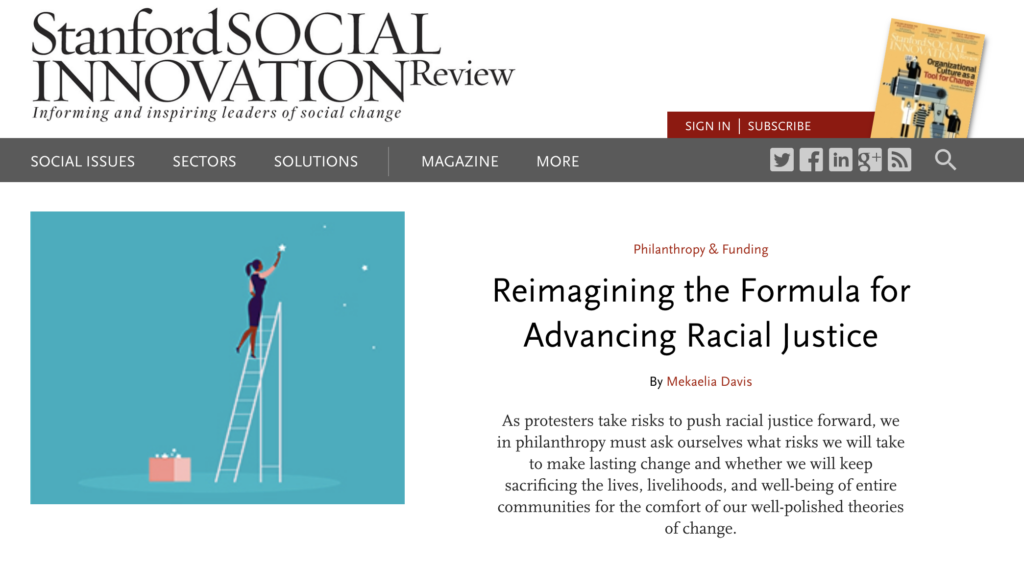